Rochford Market 2021 © All information and images contained in this site are subject to Copyright and may not be copied and/or used in any other website or publication without express permission.

The next century became a time of changes to the Square and a time of modification.   In 1861, the Market Hall was demolished after failed restoration plans. Lack of money and resources, and the closure of the Market had left the Hall in a state of disrepair.   It had served Rochford as a covered market place, a prison, a shelter for livestock, a wool store and barbers shop.   Nevertheless, after being deemed structurally dangerous, the Hall was brought to the ground.   Another Square antiquity to go was the Town Pump.   Erected in 1820, the pump distributed water to the inhabitants of Rochford, but as the village grew into a town and the industrial revolution domesticated water supply, the pump was redundant.   It was removed and a fountain put in its place in 1902.

And yeilded of my best,

Folks laugh at me, and jest.

I well supplied your need,

And if I rusted in my prime,

And kept me in good order too,

As you must surely know;

But, if you doubt my word, then you

He knows, for many, many a time,

And painted me, nor did repine,

Deny it, if you can!

A quarter century ago,

When I was feeling queer,

The late, F. SCOTT admired me so,

He married me for a year.

He had my works all scraped and cleaned,

And then cleaned out my well,

So thas the wated brighter seemed, -

But only for a spell.

For as the Towns around me grew,

They tapped my vital spring,

And only those who know me, knew

How hard I had to cling -

To keep the very life in me

And naid the precious drink;

Alas! That I should live to see

My health, it failed, and so they sent

To ROME, but BISHOP said -

“The poor old pump is dead.

“The Water Mains are laid you see,

“And soon from South Benfleet,

“The water will be coursing through

“The pipes in every street.

“So let’s erect a Fountain,

“Upon the old Pump’s site;

”Where naughty boys and wicked men

“May drink and ne’re get tight.”

And so before they bury me,

They’re adorned me with this wreath;

To those who thus have honoured me

But this was all to change, as the redundant Market trading area was to see a new arrival of activity.   On the eve of World War One, the market was opened for farm stock on a Thursday, dating back to the Charter cited by Morant perhaps?    This period was a prosperous one for the market, surviving nearly half a century until 1959.

Further to the industrial revolution forcing the removal of the Market pump, so the 20th century’s technological revolution forced the removal of the horse and cart, and moreover, the introduction of the affordable car.    Sadly, the Market Square became a car park.    Where once travellers stood to board a coach to London, now stood a bus stop for shoppers to covey them to the town centre, to Southend. 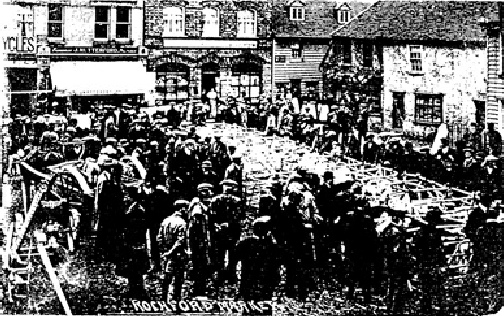